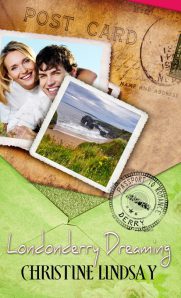 Acclaimed New York artist, Naomi Boyd, and music therapist, Keith Wilson, loved one another five years ago, until her grandfather with his influence over Naomi separated them.

That root of bitterness keeps them apart until a letter from Keith’s grandmother, Ruth, draws Naomi to Londonderry to find she’s too late. Ruth has passed on. After the death of his beloved grandmother, Keith has also come to Londonderry only to open the door to his past…Naomi…beautiful as ever, the girl who broke his heart.

A mysterious painting in Ruth’s attic brings up questions about their grandparents’ entwined past and their own broken romance. But more comfortable with the unspoken languages of art and music, Naomi and Keith find it difficult to share their old hurts and true feelings.

Will the majestic coastline of Northern Ireland inspire them to speak the words to bring peace to their grandparents’ memory and to rekindle love?

Christine Lindsay was born in Ireland, and is proud of the fact that she was once patted on the head by Prince Philip when she was a baby. Her great grandfather, and her grandfather — yes father and son — were both riveters on the building of the Titanic. Tongue in cheek, Christine states that as a family they accept no responsibility for the sinking of that infamous ship. Stories of Christine’s ancestors who served in the British Cavalry in Colonial India inspired her historical series Twilight of the British Raj of which Book 1 Shadowed in Silk has won several awards. Book 2 Captured by Moonlight is so far a finalist for three awards this 2014. Christine is currently writing the final installment of that series called Veiled at Midnight to be released August 2014. Londonderry Dreaming, a romance set in Londonderry Northern Ireland is Christine’s first contemporary romance. Her short Christmas story Heavenly Haven is available as an Ebook on the Kathi Macias Twelve Days of Christmas. Please drop by Christine’s blog site www.christinelindsay.com